skip to main | skip to sidebar

Shame I missed this event last night but good report on it herehttp://secondavenuesagas.com/2010/12/08/debating-subway-map-form-and-function/
Posted by MapMark at 4:52 AM No comments:

A great new fantasy map discovered here by blogger Brian Cook:
http://www.thecookblog.com/hartford-metro-map-the-process
He's invented a Metro system for the city of Hartford and created a great, clear, net and whimsical Metro map - which he needs some support for.
Posted by MapMark at 3:02 AM No comments:

Cheers to "alieg" for posting this:
http://alieg.wordpress.com/category/harry-beck-2/
Nice piece.
Posted by MapMark at 5:51 AM 1 comment:

The map that never dies 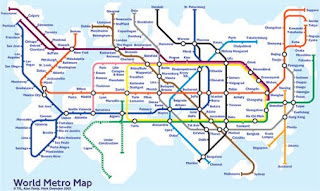 The 'World Metro Map', above, has now appeared in three other books (on the cover of one:

been front page of the Times Travel section:

is posted on hundereds of blogs (including the very fine and respected cartography websites « strangemaps », « map room » and « cartophilia », plus cool places like LondonUndergroundBlogSpot.

It’s been turned into a poster:

and is quite possibly out there somewhere as a t-shirt or pair of underpants !

The reason I raise this is not merely shameless self-promotion (though this is of course one of the main reasons for blogging !), but to highlight the story of a cartographic concept that was intended for one use, yet has mushroomed into something much bigger : surely one of the great joys creation and of the internet?

So the history of the thing goes like this: it started life purely as an idea for the title page for my first book "Metro Maps of The World". The idea was simply to show all 200 cities mentioned in the book on a single map of the world in the style of the classic London Tube diagram. Little did I know as I poured over atlases and shuffled papers round the living room floor back in 2002 (much to the annoyance of flat-mate and partner of the time), that what I was trying to design would cause such ripples round the world.

First up, I was incredibly fortunate to gain special dispensation for the design from London Underground themselves. They quite rightly protect their intellectual property and don't give permission very often for looky-likey maps. (The first, Simon Pattersons 'Great Bear' which became so famous it now hangs in the Tate!). Though mine wasn’t simply a carbon copy of the existing tube with station names changes as Pattersons was, we still needed permission to use the Johnston font, the interchange symbols, line colours and generic style of the existing and highly copyrighted LU diagram.

Being a complete amateur in map design, I then took my first rough scribblings to an incredibly nice fella called Alan Foale (at the time he worked for Clockwork studios), who was (and still is) responsible for implementing LU and TfL changes to the official London Tube map. He kindly took on board my cooky project and from it was produced the first version of the ‘World Metro map’ which went onto the title page of the book, published in 2003 by Capital Transport.

As the book came out in the UK, we were lucky enough to get coverage in The Times. Somehow another article that was due to sit on the front cover of the Travel section got dropped so the editors there picked up the World map and it duly appeared blown up to huge proportions on the front cover of that section of the paper (1 November 2003 edition - see image above). Then ‘Modern Railways’, Metro freepaper and others picked up on it.

Well since then the map has not stopped appearing in all sorts of places!

There was such a demand into the Times for copies of the item that London Transport Museum quickly printed more copies of a large version poster that we had made (originally just given to book buyers at the launch event in the museum) – I’ve thrilled to say that those posters sold like hotcakes and are apparently still adorning walls all over – here’s one that got sent to me from Hong Kong for example;

The book itself then got translated into Dutch of all languages, bless them and was published in 2005 as ‘Metrokaarten va de Wereld’ with the resulting use of the world map by various Dutch journals.

Next up we were lucky enough to get the book commissioned for American publication, (as 'Transit maps of the World, with an updated map and for, publishers Penguin I produced a flyer based on the new map

) - well then it just went crazy! and started appearing in magazines and on blogs all over the place!

The London Transport Museum then reprinted the poster and made the Travel Journal mentioned above.

Then it got picked up for Frank Jacobs excellent 'Strangemaps' book last year and thereby gained another lease of life...and hence todays inclusion in the New York Times!

So an abject lesson in how from little acorns etc...

Obviously I'm thrilled, and extend my thanks to all the bloggers, journalists and book-makers who've loved the idea and run with it, but I remain to this today amazed how a simple idea can take off!

And here's a few other blogs & sites who’s kindly posted about the map:

Transit Maps of the World (www.amazon.com/Transit-Maps-World-Mark-Ovenden/dp/0143112651)

Just spotted this well written blog looking at the London Underground diagram and the New York Subway map. http://warofyesterday.blogspot.com/2010/02/subway-map-i.html Joe also plugs my book at the end of his piece so he's obviously a discerning chap!
Posted by MapMark at 4:10 AM 1 comment:

Interesting to read how this blogger sees the way London & San Francisco transit maps compare http://burritojustice.com/2010/01/14/rare-hectic-energy-vs-slavish-geometric-inaccuracy/ plus some nice diagrams he's made too of the Bakerloo line.
Posted by MapMark at 7:19 AM No comments:

Made it to the 'New Yorker'!

Hugely honoured to appear in the prestigious 'New Yorker' magazine with a review that nicely captures the essence of my recent book about the Paris Metro map. http://www.newyorker.com/online/blogs/books/2010/01/paris-underground.html My sincere thanks to Macy Halford for 'getting' where I was coming from!
Posted by MapMark at 7:15 AM No comments:

Nice feature on the recent changes to the San Francisco BART map. The old one was pretty messy I'm glad they changed it for something more stylish.
http://observatory.designobserver.com/entry.html?entry=12397
Posted by MapMark at 4:35 PM No comments: